24 Mar OUR “GIFT OF SHADE” TO FOXY AND HIS “GIFT OF SONG” BACK TO US! HAPPY 50TH ANNIVERSARY FOXY! 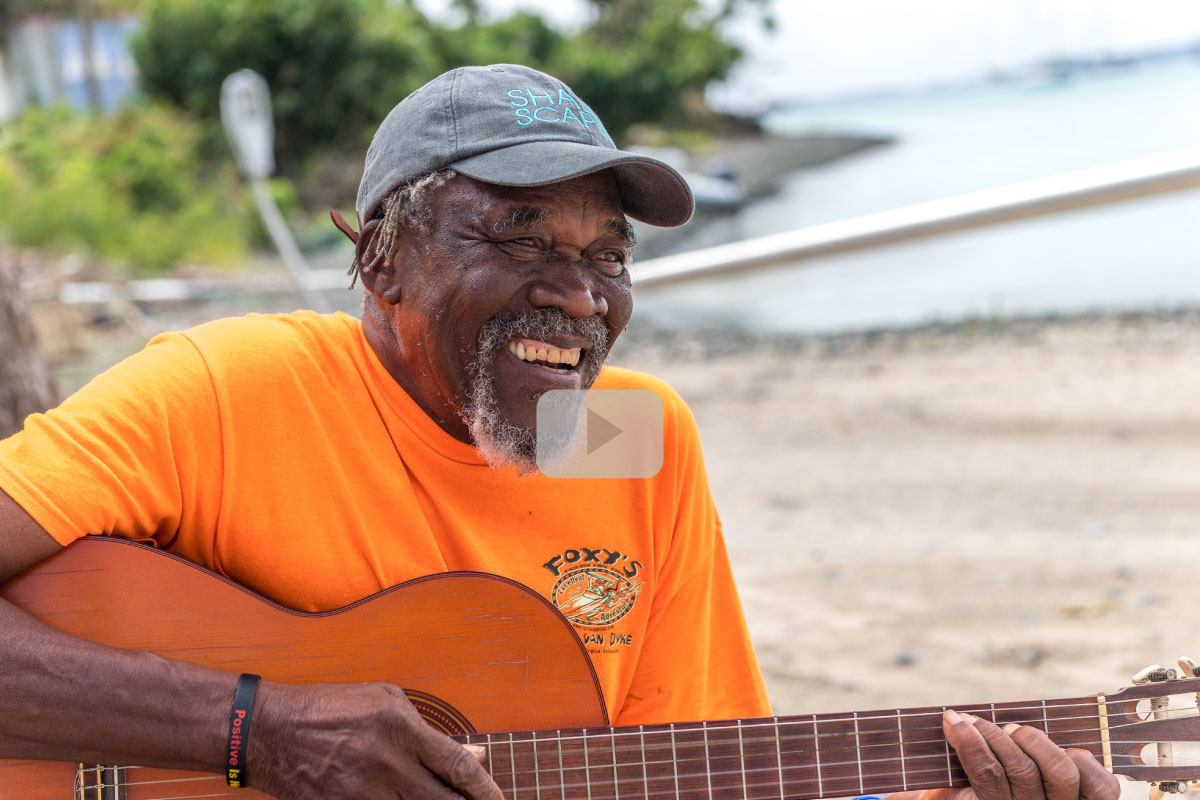 What do Princess Anne, Mick Jagger, Kenny Chesney, Tom Hanks, Richard Branson, “one of the Beatles,” a slew of other famous people, and many of us commoners, have in common? We’ve all been to Foxy’s Tamarind Bar on Jost Van Dyke, and probably each of us many times! One of my favorite rumors is that Van Morrison wrote Brown-Eyed Girl while sitting on Foxy’s dock. (Anyone know if it’s true??)

For those of us who have traveled this amazing part of the world for many years, we know that Foxy’s is super-special place to visit. It’s where “Old Year’s Night” happens annually: Great Harbour fills up with boats and ferries shuttling folks from nearby islands, including Jost Van Dyke’s “sister island,” the U.S. Virgin Island of St. John, to ring out the Old Year and ring in the New Year. This one-of-a-kind evening has been happening for a very long time at Foxy’s. But any day at Foxy’s is wonderful, too, and I have personally been there many times and have very fond memories.

But nothing is more exciting, especially after the devastating back-to-back hurricanes of 2017, than to know that Foxy and his amazing team on Jost Van Dyke are celebrating 50 years in business! How cool is that? TODAY, MARCH 24, 2018! 50 years!!

Foxy was born on the British Virgin Island of Jost Van Dyke in 1938 among his family’s fifth generation on this sweet and tiny BVI. His granddaughter is now among the seventh generation! Fifty years ago today, he opened his restaurant and bar, and has since entertained royalty, rock stars, and politicians among tens of thousands of people–many who keep coming back, sometimes year after year. While installing shade at Foxy’s, we asked some folks how often they had visited this iconic BVI establishment. “Oh, for twenty years or so,” said one group from Pennsylvania and Michigan. “Since 2000,” said another couple. 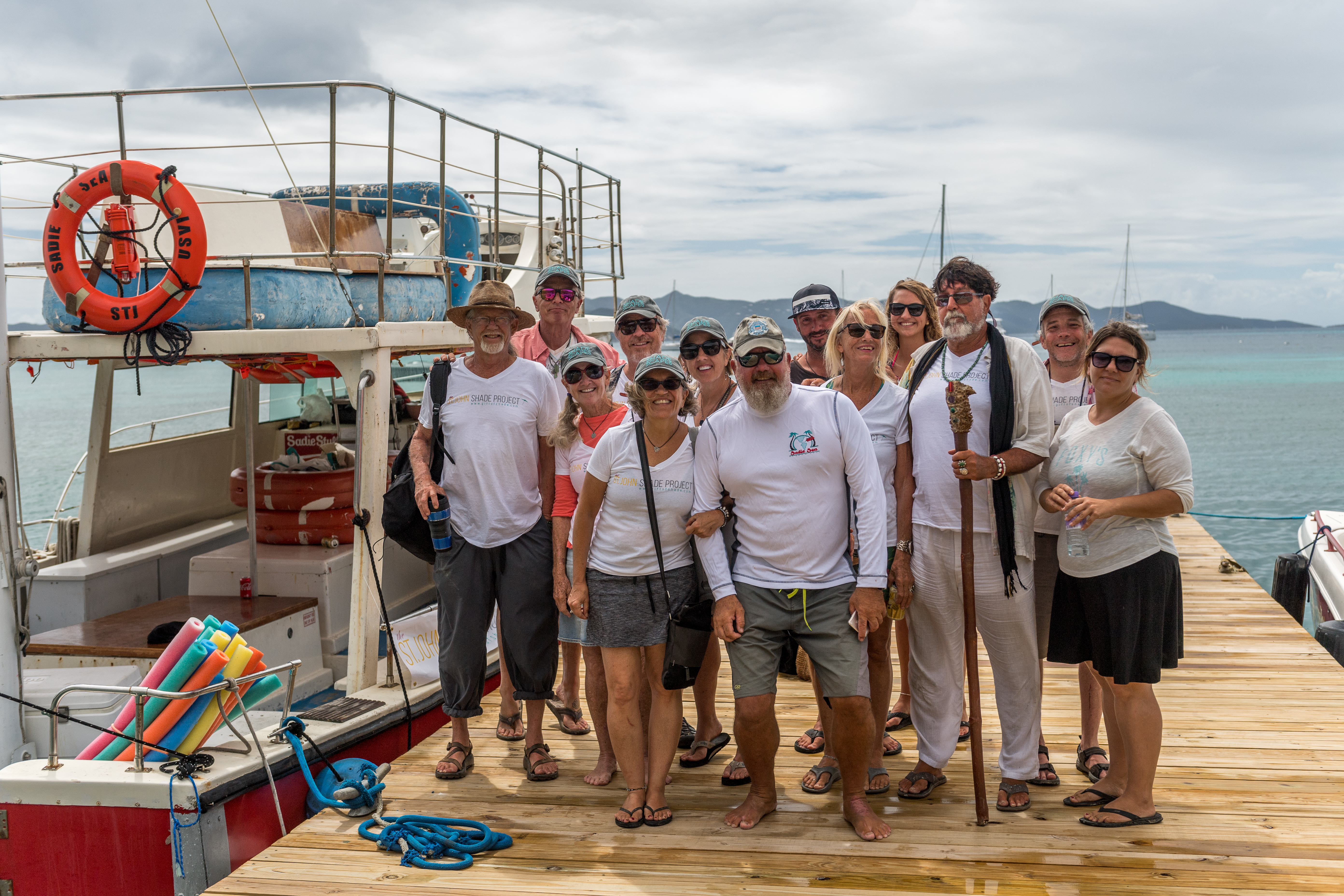 Shade Project team and many friends from St John traveled over with Captain Tom of Sadie Sea to bring Foxy the Gift of Shade.

When our St. John Shade Project arrived from neighboring St. John on Captain Tom’s wonderful Sadie Sea, we unloaded multiple umbrellas onto the small island for Foxy’s. As we walked down to Foxy’s to check out the needed shade possibilities, we could see from a distance Foxy was already mingling with and entertaining his guests, well before the destined lunch time.

“I was just in Atlanta,” Foxy said without explanation. Later, a table of folks from the U.S. Midwest mentioned Foxy’s purpose: recording an album with musical legend (and amazing philanthropist) Kenny Chesney!!! “It should be out in a few months,” the folks at the table informed us. We were so excited to hear!!

Foxy is a natural entertainer, and to say the least, a very robust 79. Soon after our crew arrived, he pulled out his guitar and sat himself down in the open area where there used to be a big roof of shade, now lost to the storms. We knew right then and there this was the perfect location for the St. John Shade Project’s donated umbrellas. We decided two large umbrellas and five smaller ones would immediately fill the shade void left by “Irmaria.” 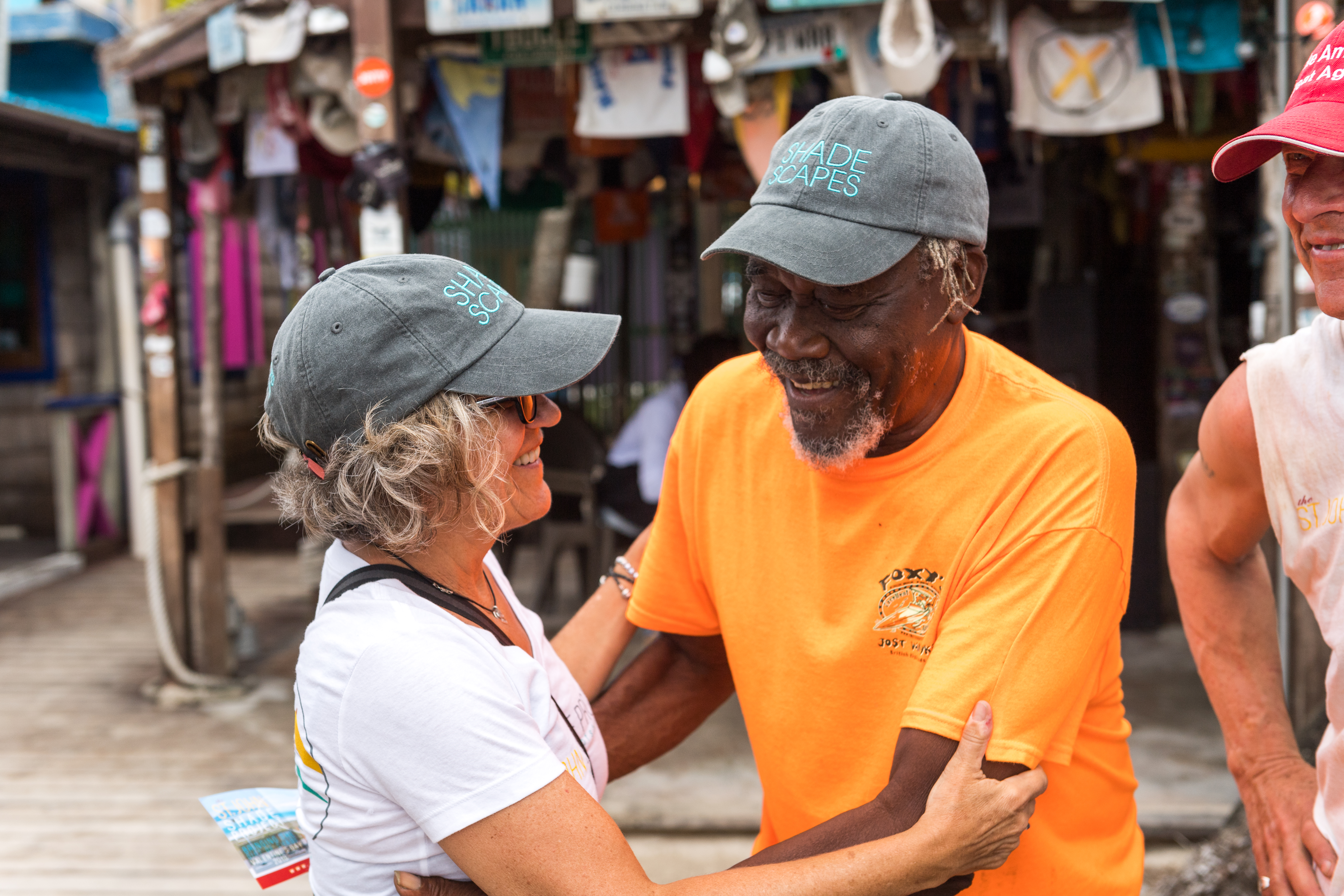 CEO Jo Moniak-Edmondson has many fond memories of times at Foxy’s over the last 30 years.

Wearing his new ShadeScapes cap, Foxy jumped right into playing what we assumed would be one or two of his favorite songs written over the years. But a big surprise–a huge gift!–was presented instead, to the amazement of the Shade Project crew and the many new friends whom we had invited to travel with us from St. John for this special day of bringing shade to Foxy.

Foxy is as quick with a quip and made-for-the-moment song as he is with his practiced fingers, and he made ShadeScapes and the Shade Project the subject matter for his first tune, to our total surprise and complete delight! The group around him cheered him on for more, and Foxy continued to entertain our group and others visiting with song after song. The smiles in the open sun were as big as can be, everyone feeling special, as Foxy always makes people feel!

It was a smaller than before-the-storms crowd at Foxy’s that day. With its casual and welcome air about it, it was so easy to settle right in and enjoy the day. Before we knew it, it’d been four or five hours and we wished we had more time!

The Shade Project Crew went into action to design the shade space for Foxy’s. Friends who came over on Sadie Sea for the day took the opportunity before lunch to go on some wonderful adventures around the island. Ric and Lolita, among other long-time residents of St. John, had not been to the island for a few years, so decided to take a little stroll around Foxy’s. They came back eager to talk about some of the island locals they had met, like Trinny the mechanic who had figured out how to get a 72-ton barge beached by “Irmaria” off the island when British engineers had failed. There was also the customs agent who did double duty at the cookie stand. With a year-round population of about 300, many people on the island are wearing a few hats these days, and welcoming the returning visitors in more than one way. 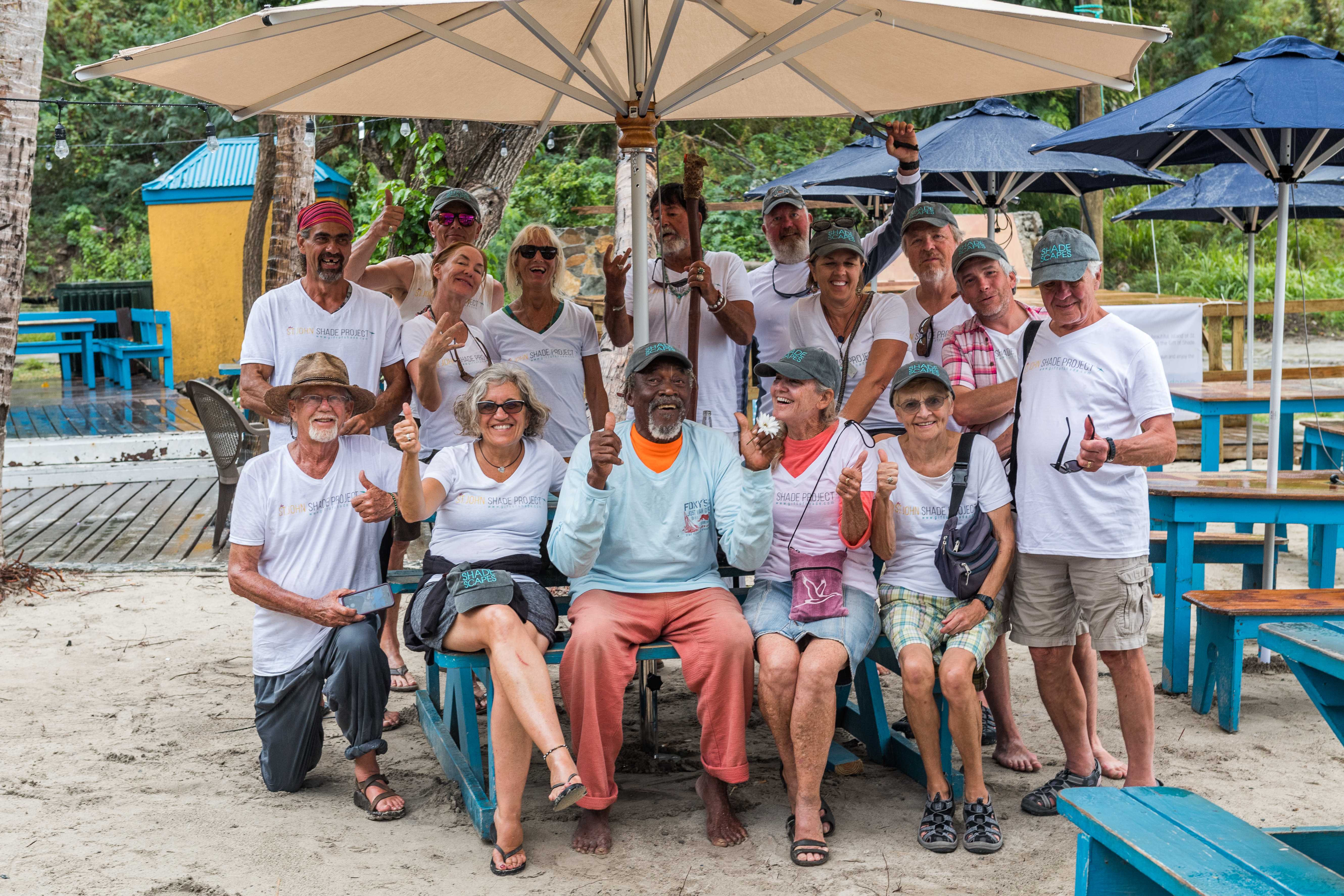 We all love Foxy and his new shade!

Above the restaurant and bar, we chatted with Susan Zaluski, the executive director at the Jost Van Dyke Preservation Society who sometimes helps manage at Foxy’s. The organization is amazing in its servicing of many important needs on the island. Projects include educating island kids about their environment, helping preserve critical seabird habitat, island clean up, and aiding in restoration, among other critical storm-related activities.

Foxy helped found this fantastic organization and sits on the board. He has spent time lobbying policy makers in the territorial government, and even back in Britain. We hear that this, among his other community-oriented work, earned Foxy the title of Member of the Most Excellent Order of the British Empire, awarded by the royal family.

What can we say on this super amazing 50th Anniversary Day, other than we were honored to have Foxy sing a song about our Shade Project (composed on the spot) and to know he and his staff were happy with the new shade design close to the beach, where no shade had remained after the storms. Our crew drilled holes in five sweet tables for the small navy umbrellas, and did a special large picnic table installation to house the two large umbrellas with nautical wooden hubs, a perfect complement for the rustic and nautical feel at Foxy’s. After the install, we enjoyed the most delicious lunch and drinks in the new-found shade by the sea. Then it was a meandering walk back to the new dock and climbing onto the Sadie Sea to head back to the other tiny Virgin on the other side of the Sir Francis Drake Channel. Smiles and hugs continued until we made it back to our dock, knowing it was a day none of us would ever forget.

Happy 50th Anniversary Foxy! We love and admire you, your entrepreneurialism, and your wonderful place–we will be back! 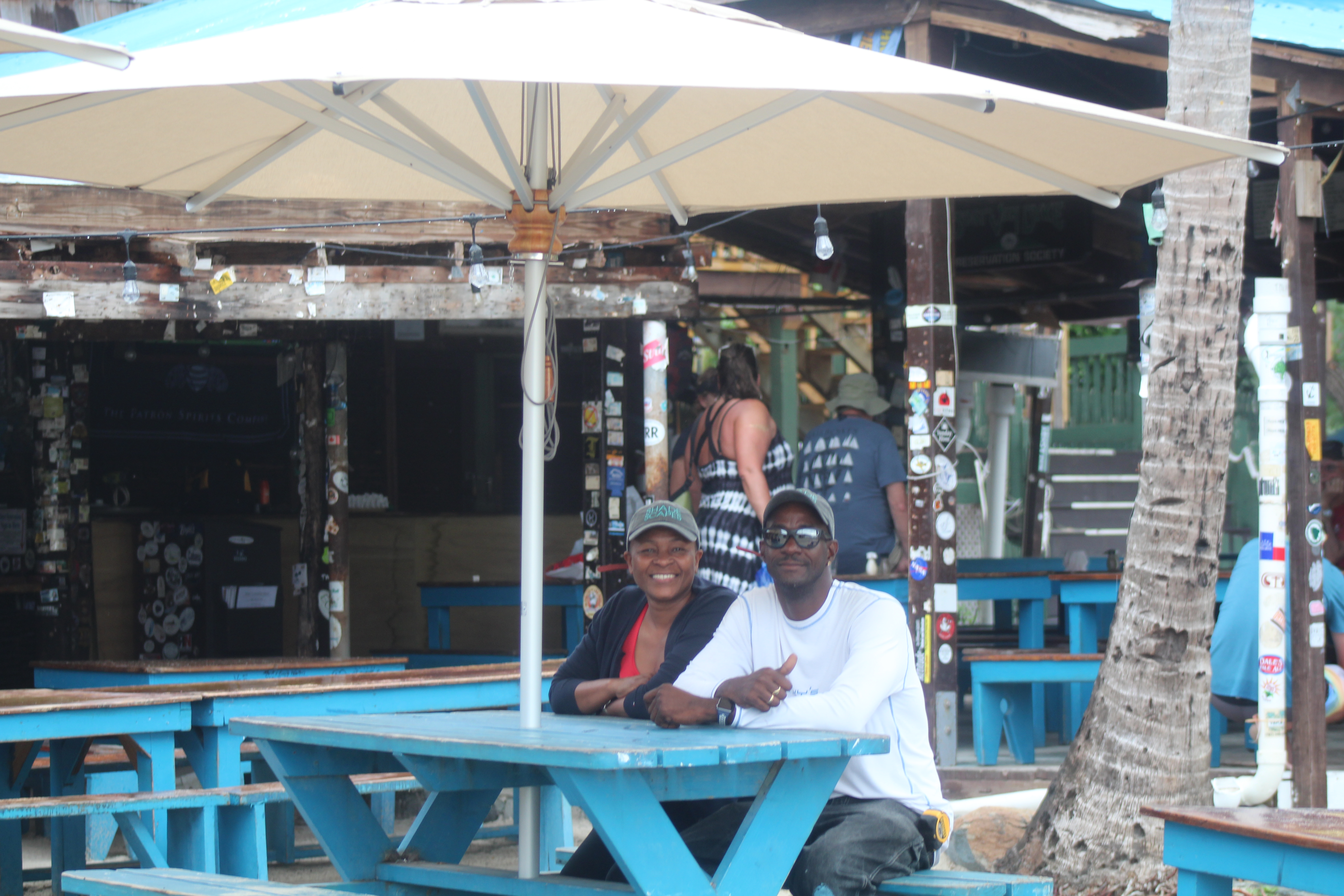 The managers and entire staff at Foxy’s are so wonderful! 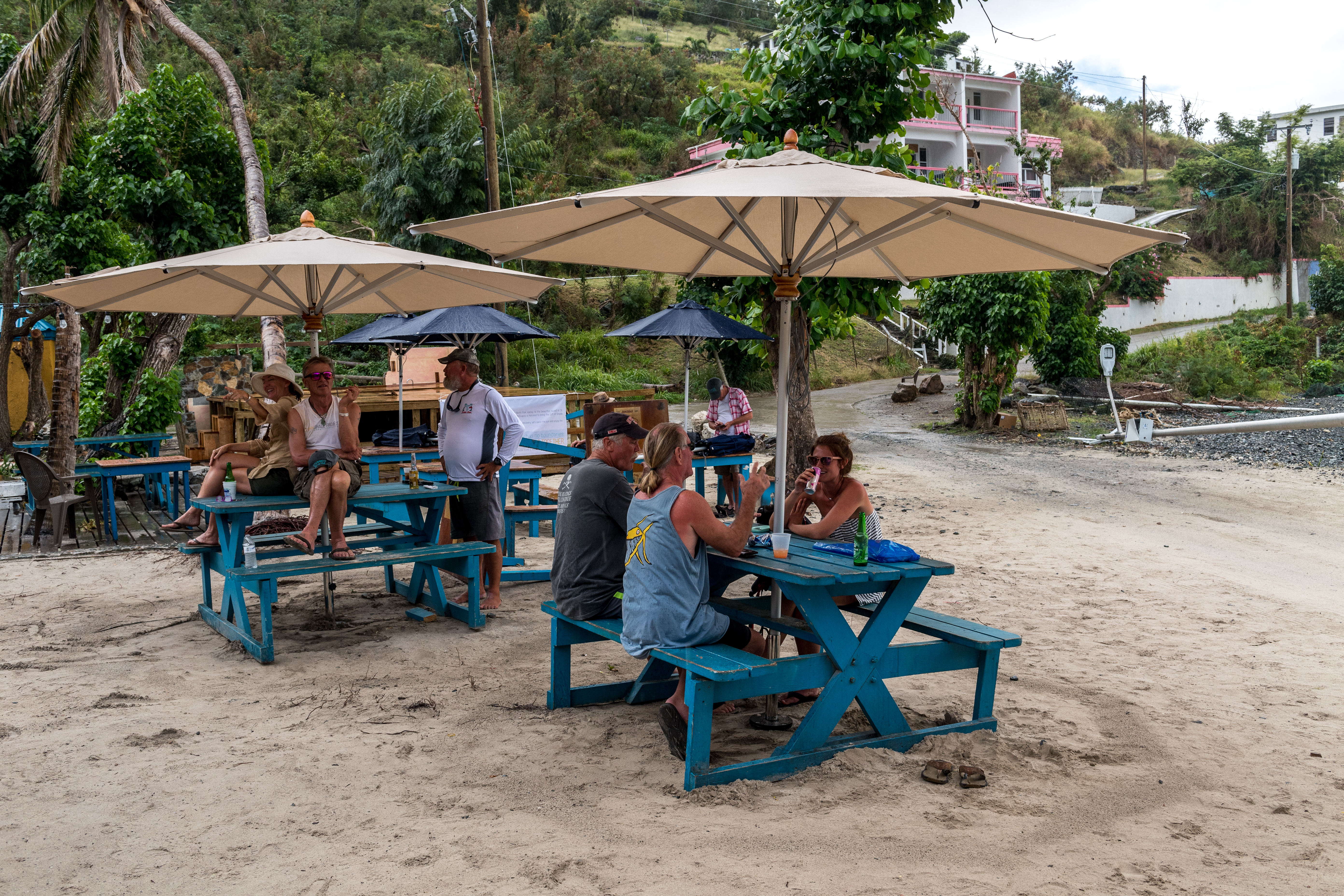 Enjoying Foxy’s shade after the installation. 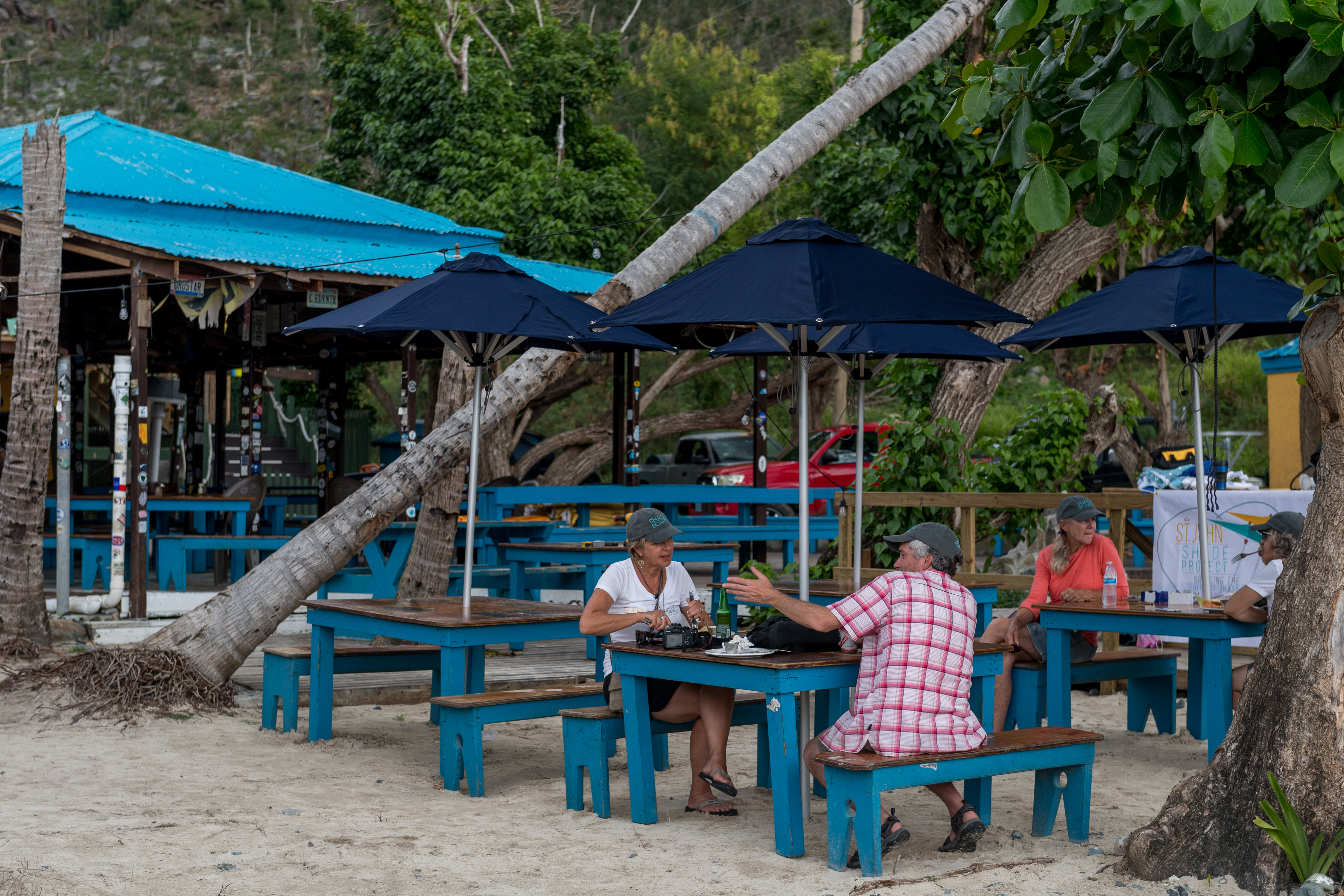 Shade by the Sea at Foxy’s to replace roof lost to Hurricane Irma.